The narwhal’s tusk reveals its past living conditions

Every year, a new growth layer is added to the narwhal’s spiralled tusk. The individual layers act as an archive of data that reveals what and where the animal has eaten, providing a glimpse of how the ice and environmental conditions have changed over its long life span (up to 50 years).

Same as rings in a tree trunk, every year a new growth layer is added to the narwhal’s tusk, which grows longer and thicker throughout the animals life. Because the tusk is connected to the rest of the body through blood, each new growth layer records aspects of animal physiology during the year it was formed.

An international team of researchers has now studied each individual growth layer of the tusks from ten narwhals from North-West Greenland. They specifically analysed mercury and stable isotopes of carbon and nitrogen which now gives information on what the whales have eaten in each year of their life and how the ice cover and the impact of potential toxic compounds, such as mercury, have changed over time.

Most people are familiar with the narwhal’s impressive unicorn-like tusk (a canine tooth) that projects from the left side of the upper jaw of the males.

Researchers do not fully agree on the purpose of the impressive narwhal tusk. Indications from recent years’ research suggest that the tusk may be used when the narwhals search for food. But presumably the males also use the long tusk to impress the females. And it is, indeed, impressive – this spiralled, pointed tusk that can reach up to three metres long.

Researchers have now shown that each layer of the tusk offers valuable data on the animal's living conditions from when they are born until they die.

“It is unique that a single animal in this way can contribute with a 50-year long-term series of data. It is often through long time series that we as researchers come to understand the development of biological communities, and such series of unbroken data are very rare. Here, the data is a mirror of the development in the Arctic,” tells Professor Rune Dietz from the Department of Bioscience and the Arctic Research Centre, Aarhus University, Denmark, who headed the studies.

The sensational data is just published in the journal Current Biology.

Among the biggest threats to Arctic top predators, such as the polar bear, white whale and narwhal, are climate change and the amount of mercury consumed by the animals.

“The higher you are in the food chain, the more mercury you accumulate into your body throughout your life. Heavy metals and other environmental contaminants accumulate at each link in the food chain, so if you are at the top of the food chain, you end up consuming the greatest amount of mercury at each meal” explains Post-Doctoral Research Fellow Jean-Pierre Desforges, Natural Resource Department, McGill University, Canada, who has co-headed the study.

Elevated amounts of heavy metals in the body are toxic and affect the cognitive functions, behaviour and a species' ability to reproduce and defend itself against infections.

In 2017, the UN adopted the Minamata Convention, which attempts to limit global mercury pollution.

In the Arctic, climate change over the past 30-40 years has led to less sea ice. Many species depend on the ice when searching for food, for example polar bears, while other species use the ice as important breeding grounds, for example seals. For the narwhal, the ice acts as a protection against enemies like killer whales.

Changes in temperature and the cover of sea ice also lead to invasion by new species from warmer areas. This affects the entire Arctic food chain and thus the living conditions of the individual species.

“We have been able to trace this development in the narwhals’ tusks. In each layer of the tusk, we measured the amount of mercury, just as we measured stable isotopes of carbon and nitrogen – the so-called delta 13C (?13C) and delta 15N (?15N),” says Rune Dietz.

The composition of the carbon and nitrogen isotopes in a layer of the tusk provides insight into the diet of each narwhal in the year from which the actual layer originated. Or rather, how high in the food chain the prey was, and in which part of the ocean the animals lived.

“What we found in narwhals of Northwest Greenland is consistent with a more general trend across the Arctic where sea ice is declining and changing the spatial distribution of sub-Arctic and Arctic fish as well as top predators. The big question now is how these changes will affect the health and fitness of key Arctic species in the years to come,” says Jean-Pierre Desforges

The analyses of the tusks revealed three things in particular:

Up until around 1990, the narwhal's food consisted particularly of prey linked to the sea ice, such as halibut and Arctic cod. During this period, the ice cover was extensive but varying.

After 1990, the ice cover in North-West Greenland declined consistently year after year and the diet of the narwhals changed to a dominance of open ocean prey like capelin and polar cod. From 1990 until 2000, narwhals also accumulated relatively small quantities of mercury as the new items of prey sat lower in the food chain.

However, from around 2000, the amount of mercury increased significantly in the narwhal tusks without a simultaneous shift in food items. The researchers have also measured higher levels of mercury in other Arctic animals over the past few decades, and they attribute this to extensive emission of mercury primarily from the coal combustion in South-East Asia. The rise in mercury might also be due to changing sea ice conditions in the Arctic as the climate is warming, causing changes in the environmental mercury cycle in the Arctic.

A bank of data

“The narwhal is the Arctic mammal most affected by climate change. At the same time, whales lack the physiological properties to eliminate environmentally contaminants. They don’t get rid of mercury by forming hair and feathers like polar bears, seals and seabirds, just as their enzyme system is less efficient at breaking down organic pollutants,” explains Rune Dietz.

However, the researchers behind the study see it as a positive sign that the narwhal has a greater ability to change its food basis than previously believed.

“With our new discoveries, we now know that there is a bank of data in the narwhal tusks found in museums around the world. By analysing them, we can hopefully get an insight into the narwhal's food strategy from different areas and periods many years back in time. This will provide us with a solid basis for evaluating how the species copes with the changed conditions that it now encounters in the Arctic,” says Rune Dietz.

The research team points out that valuable, chronological information is also waiting in other types of biological material, for example from the teeth of other species, hair, whale baleen, whale earwax plugs, shells from shellfish and year rings in trees. 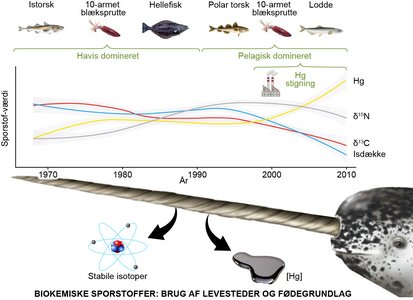 Data on ?13C, ?15N and mercury in narwhal tusks measured in
layers corresponding to the period 1968-2010. The cover of summer
sea ice for the same period is also shown. Figure: Aarhus University,
Denmark.